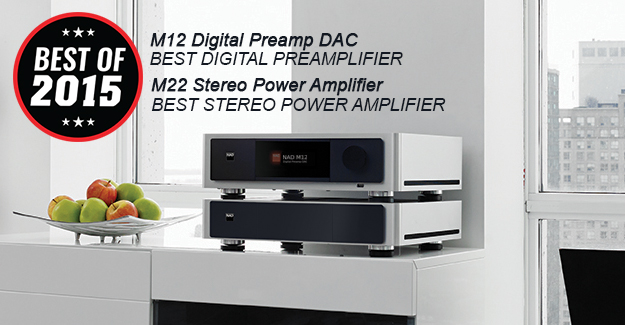 The NAD M12 Digital Preamp DAC and M22 Stereo Power Amplifier both won a prestigious “Best of 2015” award in their respective product categories from the US-based audio/video source, SECRETS of Home Theater and High Fidelity. Before being named the “Best Digital Preamplifier of 2015” and “Best Stereo Power Amplifier of 2015”, the M12 and M22 caught the attention of reviewer Jim Clements and received critical acclaim in a May 2015 review:

“The NAD M12 and M22 amps impressed me more than any amplification component I have reviewed in the last several years. Due to the products’ digital DNA, I was prepared to hear a bright, grainy or thin sound. What I heard was in reality the very exact opposite of this.”

SECRETS provides straightforward, technical information about new products and emerging technologies. The “Best Of” designation is one of the most coveted accolades in the audio industry.